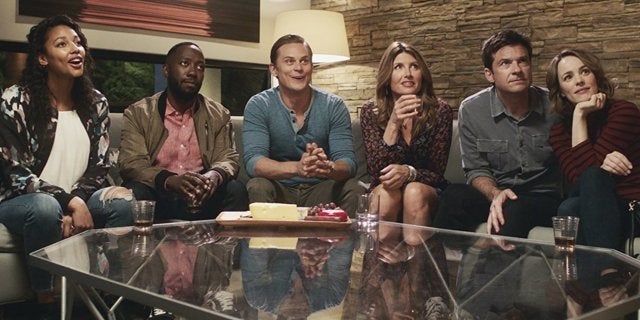 If you ask Lamorne Morris, he will tell you most of his fans recognize him for his role as Winston Bishop on New Girl. We know because we asked him on Talking Shop on Tuesday. However, having recently starred in Sony’s Bloodshot movie, Morris has a resume which continues to diversify and one which already included the popular comedy Game Night. Game Night released in 2014, starring Morris with Jason Bateman, Rachel McAdams, Kyle Chandler, and other popular stars. Before it came to a full close, there was a classic tease for a sequel but there has been no news since. If it were up to Morris, that sequel ball would get rolling.

“I heard it being talked about but I don’t think it was ever too serious of a conversation,” Morris said on Talking Shop, ComicBook.com’s live Instagram series. “I think if you talk to John Francis Daley, Jonathan Goldstein, directors, and Jason Bateman, you know, maybe. Because it makes sense, the movie did well. People loved the movie. I’ve never heard someone say, ‘That’s a bad movie.’”

Game Night was popular with critics and fans alike, getting overwhelmingly positive reviews and taking in $117.7 million at the box office — solid numbers for a comedy based on an original concept. “It’s a fun movie, the cast does great everyone’s great in it,” Morris said. “I would love to do, a remake, or a sequel to that.”

For now, fans can live with the fact that Morris has never had to face Denzel Washington after his impressions of the iconic actor and Game Night jokes about him have gone viral. “I met Denzel before I even knew I could do a a Denzel impression,” Morris said. “I used to host for BET back in the day so, there was a show I had, a show called Hot Wired which was about video games and gadgets so I would tell all these weird jokes. I would go to Comic-Con I would go to these different conventions and do weird stuff and then right after I shared the set with BET’s other show 106 & Park.”

This is where Morris’ only encounter with Denzel Washington came to be, so far. “After I was done with my show, taping my show, I heard, ‘Oh Denzel’s coming to be on 106 & Park today.’ And I just kind of waited around, hovered around a little bit until I saw him. [I] walked up and said, ‘Hey man I’m a huge fan,’ and he goes, ‘Thank you, thank you very much that means a lot.’ I was like, ‘Cool man, really cool.’ And then he just shook my hand took a photo with me and he’s like, ‘You take it easy.’ I was like, ‘Okay I will.’ That was it that’s the only interaction I’ve had with him. Now, I wouldn’t do an impression in front of him but I would definitely like to work with the dude!”

Perhaps those Denzel Washington jokes from the first Game Night can score a cameo from the actor for the sequel.

ComicBook Nation Podcast — In this latest episode, we talk about Venom 2 & The Batman getting delayed, The Hunger Games prequel movie, and the Justice League Dark TV series!
! Listen & Subscribe!